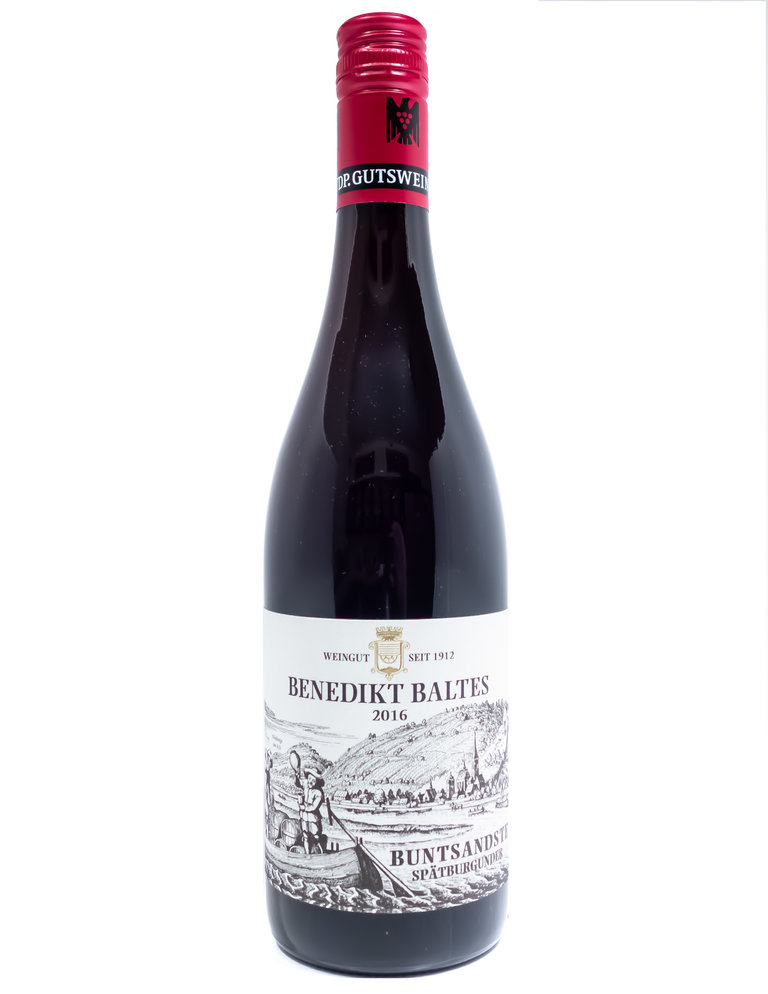 $24.99
Out of stock
Benedikt Baltes Spätburgunder Buntsandstein 2016
Share this product:

Benedikt Baltes may be the undisputed champion of spätburgunder (pinot noir); his laser-like focus on the varietal grounds his revitalization of the vineyards and cellars of the Franconian city of Klingenberg. Benedikt originally hails from the Ahr, where his family grew grapes for the local co-op, but after studying enology and economics, and interning in Austria, Hungary, and Portugal, he sought to branch out with vineyards of his own. He ended up back in Germany at Weingut Stadt Klingenberg, which was founded in 1912. (Winemaking in this region stretches back to the 12th century.)

In 2010 Benedict purchased the old municipal winery, which boasts 12 hectares of old vines planted on steep, red sandstone terraces, now all protected historic monuments. He seized the opportunity to start fresh, unfettered by traditions or expectations, and revitalized the old vineyards. Converting to organic farming (certified organic as of 2018), fermenting with native yeasts, and aging in local oak all further highlight the distinctive identity of spätburgunder. He doesn’t own a tractor, instead harvesting everything by hand. A flock of Dwarf Breton sheep graze, aerate, and fertilize the soil, while the estate also grows its own stinging nettle to use in antifungal teas.

A staunch advocate for spätburgunder’s “autonomous identity,” Benedikt follows an approach less akin to that of other red wines, such as Burgundy, taking inspiration instead from Germany’s iconic rieslings. The vineyards’ steep red sandstone terraces retain crucial heat, insulating the pinot vines during overnight temperature dips, and imparting a distinctive iron-driven minerality. (This is essential for pinot noir since Klingenberg sits close to 50 degrees north latitude!) These dramatic diurnal temperature shifts give the wines a cool, taut, elegant character, with tremendous detail and depth. Delicate aromatics and fruit are balanced by nervy acidity and grip.

All of Baltes’ vineyards are classified, which means that even this entry-level cuvée has pedigree. Grapes are biodynamically farmed on red sandstone soils (‘Buntsandstein’ or ‘colored sandstone’ in German), and the wine is vinified with native yeast in large neutral oak barrels from the local forests of Klingenberg. After aging 18 months in barrel, it is bottled without filtration nor additions. A far cry from the fruitful, rather simple character common to so many German pinot noirs at this level, this bottling, like all of Benedikt’s wines, boasts elegance and complexity; this one just happens to sit on a lithe frame. The nose has tremendous lift - fresh-picked black cherry and spice abound - while the palate shows such freshness with a touch of smoke on the finish. During the spring and summer months, this will absolutely become the slightly-chilled pinot of choice, if you can save it for that long! Biodynamically grown, low-intervention/natural wine, vegan.