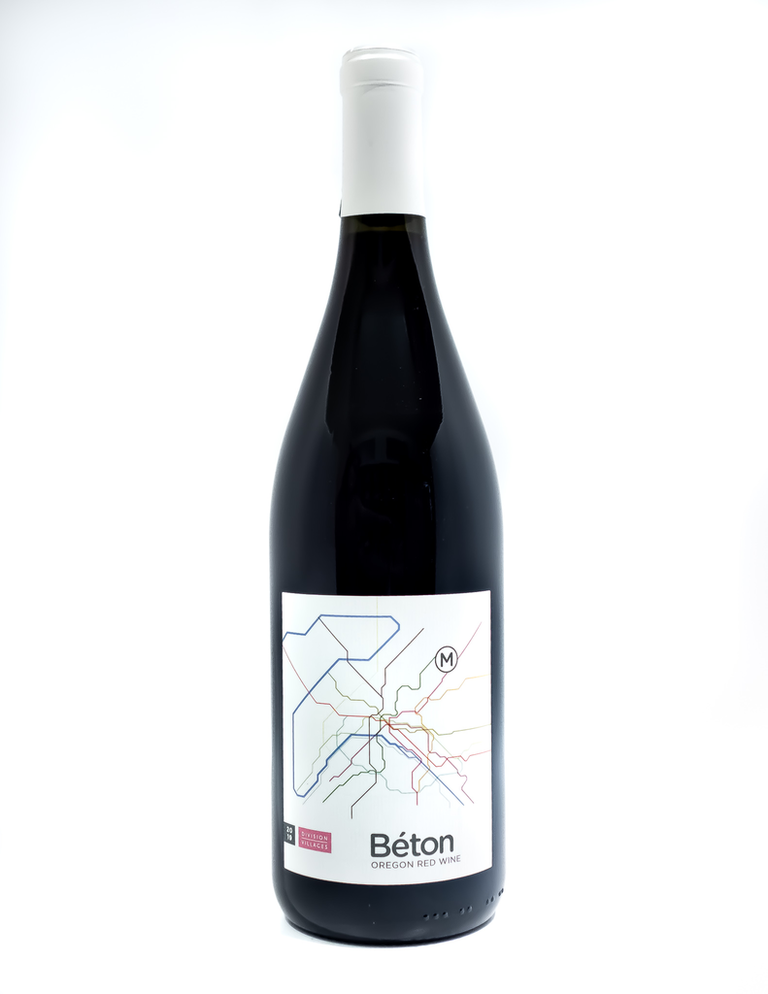 Division Winemaking Co. is a Portland, Oregon based winery founded in 2010 by Kate Norris and Thomas Monroe, and inspired by the wines of Loire, Beaujolais, Burgundy, and the Northern Rhône. This urban winery works with well-farmed terroir-driven vineyards, many of which are organic or biodynamic to source the grapes that allow them to make approachable, balanced wines with minimal manipulation. ‘Béton’ was directly inspired by the Touraine rouge cuvée wines that are served as bistro wines in Paris. Now in its eighth vintage, this popular West Coast homage to Loire table wines is a delectable blend of grapes from two unique Oregon wine regions. The Applegate Valley AVA in the southern part of Oregon boasts granitic bedrock and a warmer, drier microclimate than the iconic Willamette Valley. The heart of this wine is made up of cabernet franc from Loire clones grown by Herb Quady, generally acknowledged as one of the best growers in the region. The cabernet franc comes from Herb’s organically-farmed Quady North Vineyard and Serra Vineyard, both nestled in the hills above the Applegate river. The côt (malbec) also comes from the Serra Vineyard, and Herb contributes a tiny amount of syrah to the blend as well. The gamay component comes from the Methven Family Vineyard in the Willamette Valley, with the pinot noir from the nearby Cassin Vineyard. Most of the components were independently fermented, including two carbonic fermentations (the Methven gamay and one of the cabernet franc), while three other parcels saw varying whole cluster fermentations allowing for a precise balance between fruity carbonic wine and more nuanced traditionally-fermented wine. All parts were then blended and aged in concrete (aka Béton), including the 975 gallon concrete vessel “Big Bertha”. The Loire-inspired inflections come through loud and clear in this delightfully food friendly wine! Juicy aromatics are classic cabernet franc, bursting with berries, currants, and violets. Clean and silky on the palate, it’s loaded with dark, deep flavors of wild black raspberries and cherries - think berries-without-the-bramble. Hints of spice, a touch of green bell pepper, earthy mineral notes, and mouthwatering acidity keep this wine lively and dangerously quaffable. Sustainably grown, low-intervention/natural wine, vegan.