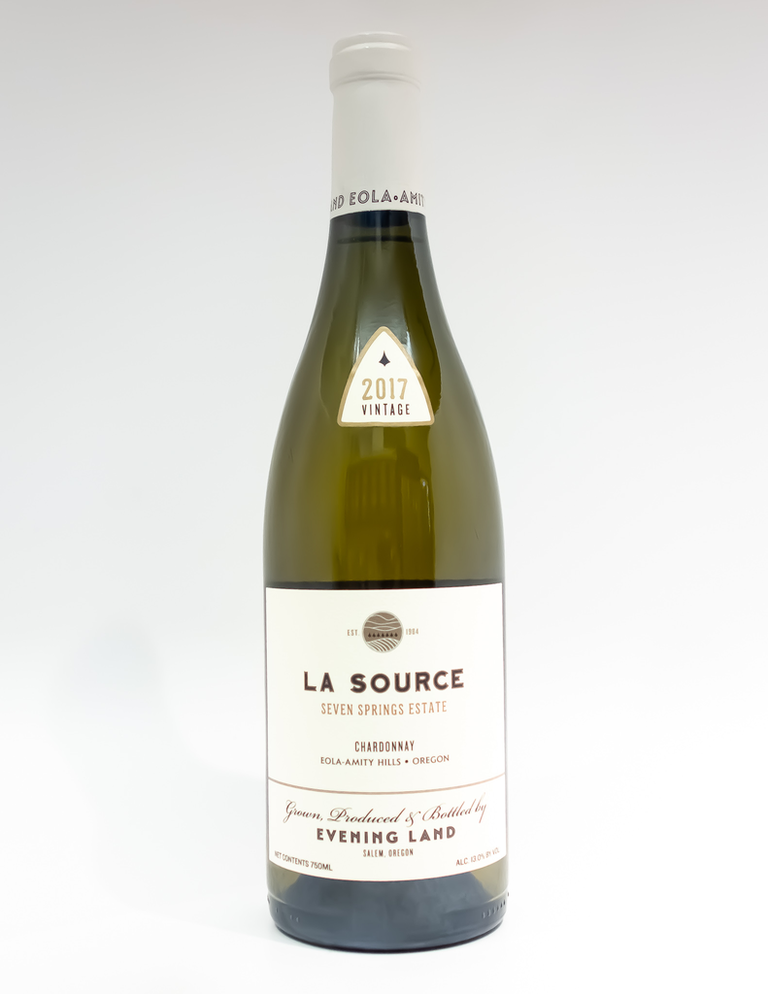 Evening Land Vineyards is all about location. The winery produces only estate grown fruit from the historic Seven Springs Vineyard. Situated in the Eola-Amity Hills area (basically around the towns of Eola & Amity) the vineyard was planted by the MacDonald family in the early 1980’s, with advice from Dominique Lafon of the coveted Domaine des Comtes Lafon. It is east facing and in close proximity to a newly minted region call the Van Duzer Corridor. There are a number of things about this location that makes this special. First, that east-facing exposition means that early morning sun drenches the vineyard and remains there most of the day. This portion of Oregon, part of the Willamette Valley, is known for its cool climate and in fact the modern industry was built on a small group of adventurous winemakers seeking these cooler sites. While Seven Springs is bathed in sun, the average temperatures in Eola-Amity Hills are among the lowest in the area. However, Seven Springs' proximity to the Van Duzer Corridor makes this place even cooler. As the Valley begins to warm during the day, that heat rises, and the Corridor conveniently provides a constant flow of cold air from the coast replacing that rising air. Each day this cold air sweeps over the hill and through the vineyard with a temperature-moderating breeze. (In reality, this area can be quite windy, a nearby winery recorded 55 mph winds just a week before my visit.)

While Lafon consulted on the project for some time, today the winemaking is in the hands of Sashi Moorman and former sommelier Rajat Parr. Parr, a Culinary Institute of America graduate, has also authored two books on wine and is widely respected for his palate and tasting ability. Moorman also has roots here in the valley, graduating from Vassar back in the mid-90’s. He cut his teeth making wine for some of the heavy hitters of southern California such as Ojai and Stoplman Vineyards.

While the Seven Springs vineyard is contiguous, it is broken up into parcels with different grapes, clones, and rootstock being utilized. The location of the vines within the vineyard is a major difference expressed through the various Chardonnays, Pinot Noirs and Gamay produced from the site. This wine comes from sixteen rows of vines planted between 450-500 ft in elevation smack in the middle of the slope. This was fermented in 500L oak puncheons where it aged for 12 months. There it aged on the lees after completing malolactic conversion. Then the wine was moved to tank for 6 months.

The nose immediately exhibits the sur lie aging combined with a note of oak aging. Bright lemon flesh and green apple show just behind the lees with a subtle note of wet stone. The palate entry feels rich, but quickly achieves a lovely balance. A nicely balanced acidity drives flavor on the finish. Lemon returns on the palate but is on the crisp side. Lots of textural interplay here, rich entry but then refreshing on the finish. Almost a bit of tangerine on the palate interplay between lemon and green apple. A stony, long finish. Outstanding wine that will age for many years. I can suggest this since when I visited, I tasted an older bottling of the wine, a 2011, that was still vibrant and showed green apple notes mingling with more floral, honeyed and nutty elements.

This is among the best estates in Oregon which is quickly becoming a source for exceptional Chardonnay in addition to the already outstanding Pinot Noirs. This is a wine that 8 or 10 years ago, I would have thought possible from the US. A must experience kind of wine. - Tim Buzinski