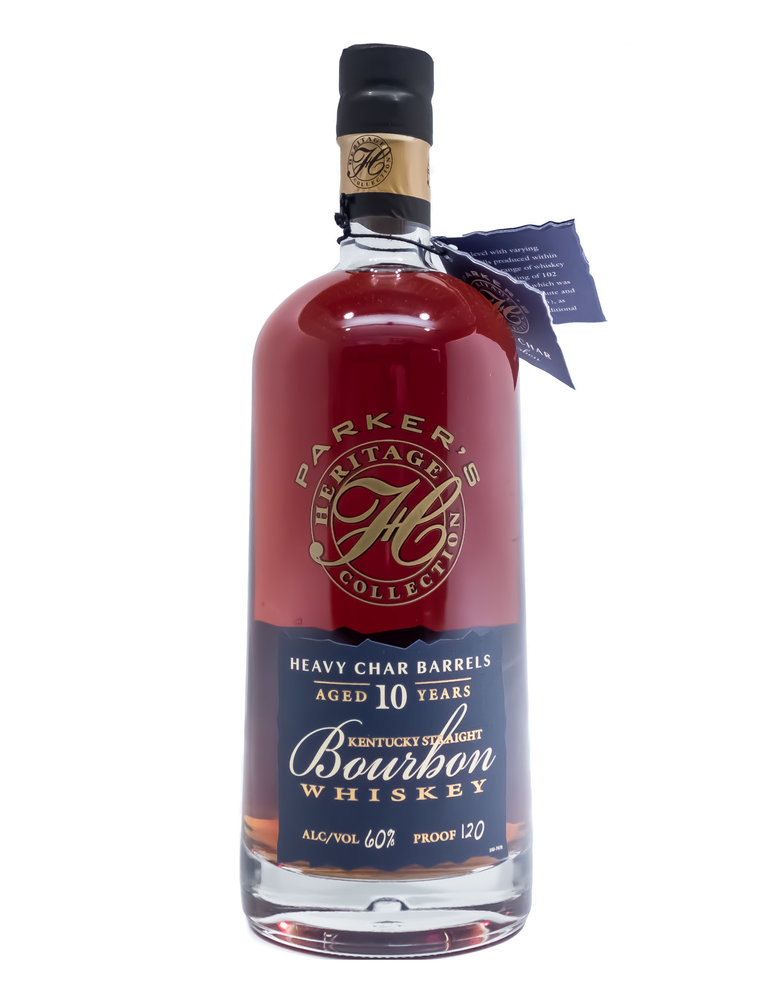 "Parker’s Heritage Collection is a hallmark lineup of Heaven Hill Distillery’s exploration in premium innovation. The 14th edition continues the interaction of barrel char across varying mashbills, this time with Heaven Hill’s traditional Bourbon mashbill of 78% corn, 12% malted barley and 10% rye. The Bourbon is aged in “Level 5” heavy char barrels, as opposed to our customary Level 3, and the resulting flavors carry intensified notes of our traditional Bourbon. Consisting of 102 barrels aged on the sixth floor of rickhouse Y for 10 years, the heavy char brings forth a caramel and maple sweetness, as well as slight smokiness developed after 40 Kentucky seasons in the barrel.

The second heavy char edition of the series advances the study of how a more intense char allows the liquid to penetrate deeper into each barrel stave and the effects on the resulting flavor. Bottled at 120 proof (60% abv) and non-chill filtered to preserve all the flavor compounds, this Bourbon showcases the broad range of Heaven Hill Distillery’s 1.8 million barrels of aging inventory.

The late Heaven Hill Master Distiller Parker Beam, for whom the acclaimed series is named, was diagnosed with Amyotrophic Lateral Sclerosis (also called ALS or Lou Gehrig’s disease) in 2010. The past seven editions from 2013-2019, including the “Promise of Hope” Bourbon, the “Original Batch” Straight Wheat Whiskey, the Kentucky Straight Malt Whiskey, the 24-Year-Old Bottled-in-Bond Bourbon, the 11-Year-Old Single Barrel, Orange Curaçao-finished Kentucky Straight Bourbon Whiskey, and Heavy Char Rye Whiskey, respectively, have raised more than one million dollars toward ALS research and patient care through contributions made by Heaven Hill for each bottle purchased. With the 2020 Heavy Char Bourbon edition, Heaven Hill will again contribute a portion of the proceeds from each bottle sold to the ALS Association."